Freedom was created in 1993 by Dionysios Vlassopoulos. In 1993 the sport was in infant form in our country. Having traveled and trained in previous years in central Europe, where the sport was well developed and organized, we dared to take the next step. We have opened in Greece a vocational school, based on European standards, adapted to the specificities of a Mediterranean country, such as Greece.

The whole atmosphere on the parachute slope of that time was a challenge for us to create and evolve.

The discovery of the Paragliding on the slope now gave people the ability to easily fulfill a primitive dream, to fly. Never again in the history of mankind has any other generation of people had this opportunity. We were lucky enough to embark on a journey of exploration and development. Although our starting point was the reckless passion for flight, due to the youth of that age, ignorance quickly became knowledge and responsibility. In Greece we have introduced teaching and training modes such as SIV, XC, Acro, Racing Seminars, Training Levels and above all we have tailor-made pilot development courses in periods and not on 5 or 10 days courses. We have established the technical inspection of equipment according to European standards, as well as the high quality of the equipment to be used during training and beyond.

In previous years racing was a very important event for the development of pilots. We created the Freedom Team, where in the years that followed, its athletes managed to win 12 championships and a huge number of cups. These athletes are great trainers today and continue to contribute to the development of the sport.

All of this made Freedom a reference point for the Greek parachute. At first we did not know where we were going to arrive, but today in our 3rd decade in the field, we feel a mutual respect for time and duty.

Our time established us as one of the best schools in Greece, which earned the respect of all. This is evidenced by the presence of dozens of world champions and celebrities who have visited Freedom in the years that have passed either to teach at the school or to fly with us.

Today we continue with the same passion, with more experience, knowledge and wisdom we derive from our many years of presence in the field. 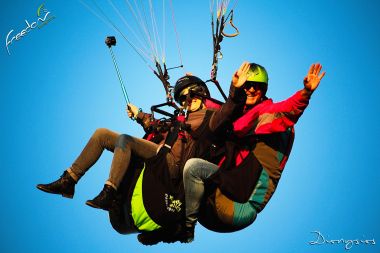 Cookies help us improve our services. By using our site, you agree to our use of cookies.